Posted by Kristine on March 19, 2016 in Memoir, Non-Fiction, Reviews 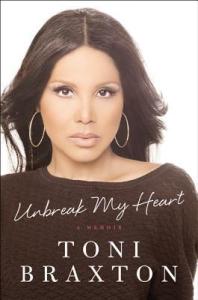 While Toni Braxton may appear to be living a charmed life, hers is in fact a tumultuous story: a tale of personal triumph after a public unraveling. In her heartfelt memoir, the six-time Grammy Award-winning singer and star of WE tv’s hit reality series Braxton Family Values is unapologetically honest in revealing the intimate details of her journey.

Toni and the entire Braxton clan have become America’s favorite musical family, but what fans may not know is the intense guilt Toni once felt when she accepted a recording deal that excluded her sisters. That decision would haunt Toni for years to come, tainting the enormous fame she experienced as a popular female vocalist at the top of the charts. Despite her early accomplishments, Toni’s world crumbled when she was forced to file for bankruptcy twice and was left all alone to pick up the pieces.

Always the consummate professional, Toni rebuilt her life but then found herself in the midst of more heartache. The mother of an autistic child, Toni had long feared that her son’s condition might be karmic retribution for some of the life choices that left her filled with remorse. Later, when heart ailments began plaguing her at the age of forty-one and she was diagnosed with lupus, Toni knew she had to move beyond the self-recrimination and take charge of her own healing—physically and spiritually.

Unbreak My Heart is more than the story of Toni’s difficult past and glittering success: it is a story of hope, of healing, and, ultimately, of redemption.

Whenever you begin reading a celebrity memoir, you can never be sure what the pages will hold. Some are so scandalous that you can’t help but keep reading. And then there are classy confessions like the ones Toni Braxton makes in this book. Everything about this book is handled with care and what seems like genuine honesty. There’s not a time that I felt Braxton used this as a means to exaggerate events or even victimize herself. The fact that she constantly analyzes the situation, is so reminiscent of how I talk myself in circles, that it had an air of honesty.

I really appreciated her recollection of her childhood and even parts of her mother’s and grandmother’s stories. It helped to not only explain the circumstances in which she grew up, but it was a reflection of the time and how it molded them and affected their families. You can’t help but sympathize with Toni’s upbringing. While she had a very loving family, she was forced to embrace extreme religious beliefs that left her wanting for more. As someone who is not overly religious, I was really appreciative of her analysis of the beliefs that didn’t make sense to her. For example, she was not allowed to watch movies, but was allowed to watch television. And her parents were extremely insistent on their children getting a good education and staying on top of their studies, but were so obsessed with their religious beliefs and routines, that they didn’t allow their children adequate time to study or do homework.

As an outsider, I actually felt sad for Toni’s circumstances. Though her family was supportive of her career and success, it seemed as if there were heavy chains attached to that. Her mother reacted so hatefully initially and made the poor girl promise to pave a way for her sisters. And worse, her sisters were raised to believe that it was Toni’s job and responsibility to make them successful. There are times when they actually blame Toni for not doing enough because at the end of the day, they didn’t have that “it” factor to make it big or at least not as big as they wanted to in the music industry. This is a shame and it’s certainly unfair. I can only imagine how much work and stress was put into creating, maintaining and rebuilding her own career. She shouldn’t have been held responsible for doing the same for her siblings. But it’s nice to see that she acknowledges that at times, she was being walked over or used and yet, she still loves her family. I say that, not because I believe you should let your family do that, but because to her, family is extremely important and I can understand that need to hold on to it at all costs.

The one thing that really left me intrigued me into reading this book was the fact Toni has an autistic son. Her reaction to the news was, in my opinion, normal. She felt as if her son was being punished because she chose to terminate a pregnancy a few years prior. But at the same time, she realizes that it was just her own guilt making her feel that way and she more than embraces her son and fights to get him the help he needs to overcome some of obstacles that come with having autism. As a mother of an autistic son, I could relate to a lot of the mixed feelings she mentioned and the frustrations she had when the doctors blame it on his hearing for two years.

There’s a lot of raw honesty in this particular book and I think Toni does a great job at balancing the truth and maintaining a sense of dignity. She’s even thoughtful enough to be considerate of the people mentioned in this book and the worst that is shown about anyone, is her distrust or frustration with someone. As beautiful of a singer as she is, it’s clear she has a beautiful heart.