Posted by Kristine on December 29, 2015 in Movies, Reviews 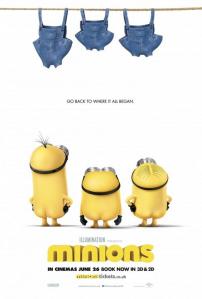 Evolving from single-celled yellow organisms at the dawn of time, Minions live to serve, but find themselves working for a continual series of unsuccessful masters, from T. Rex to Napoleon. Without a master to grovel for, the Minions fall into a deep depression. But one minion, Kevin, has a plan; accompanied by his pals Stuart and Bob, Kevin sets forth to find a new evil boss for his brethren to follow. Their search leads them to Scarlet Overkill, the world’s first-ever super-villainess.

I originally saw Minions the weekend it was released. My son was so excited to see it that we got up first thing in the morning and saw the first showing. I’ll admit, it was adorable in the beginning. But over time the minion speak began to hurt my already sleepy head. I’m not sure exactly how long I fell asleep for, but from what I’ve gathered, it was a good thirty minutes. So I didn’t think it would be appropriate to review a movie that I fell asleep in.

For Christmas, my son received the DVD and I finally got a chance to sit down and watch it in full. All in all, it’s a cute children’s movie. The thing about minions are that they are just impossible to dislike. They only want to find a “boss” to serve and their innocence is what is so enduring. The story of their evolution is entertaining, but it’s not long enough in my opinion.

As for Scarlet, she was a bit of an annoying antagonist. I wouldn’t even call her as evil. The truth is she was a bit psychotic and obviously selfish and self-centered. Sadly, it’s this character that really ruins the movie for me. The only redeeming factor for the story comes in the brief moments when you first see Gru. Still a young boy, it’s interesting to see how the story makes it full circle and the minions find their beloved boss.

I didn’t enjoy the movie as much as I thought I would. But the important part is that my son did. He loves the movie and made we watch it two times in a row. For that reason, I’ll give it 3.5 stars.