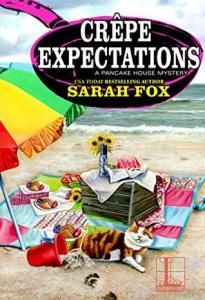 When a murder case from the past heats up again, it’s up to Marley McKinney to sort through a tall stack of suspects in the latest Pancake House Mystery . . .

Although it’s a soggy start to spring in Wildwood Cove, the weather clears up just in time for the town to host an amateur chef competition. Marley McKinney, owner of the Flip Side pancake house, already signed up to volunteer, and chef Ivan Kaminski is one of the judges. But when Marley visits her landscaper boyfriend Brett at the site of the Victorian mansion that’s being restored as the Wildwood Inn, she discovers something else pushing up daisies: human remains.

The skeleton on the riverbank washed out by the early-spring floodwaters belonged to
eighteen-year-old Demetra Kozani, who vanished a decade earlier. While the cold case is reopened, Marley must step in when some of the cook-off contestants fall suspiciously ill. Stuck in a syrupy mess of sabotage and blackmail, it falls to Marley to stop a killer from crêping up on another victim . . .

In this latest edition to the Pancake House Mystery series, the primary focus is on a murder that happened ten years earlier.  It’s a nice change from the original plot line and it lifts a lot of the weight off of Marley in the plot.  During this story, she’s not only trying to uncover who the murderer is, but she’s discovering more about the victim.  For once, Marley doesn’t have any real ties to the victim, although several people she knows does.

I find that I like Marley’s investigations into past crimes.  When the murders occur in the present, she gets caught up in the drama of potentially being the next victim.  While the real murderer is still present, Marley isn’t in as much danger as she normally would be.  Also, since she didn’t know Demetra at all, her questions come off as more as inquiring and less as imposing or accusing. It’s kind of difficult to explain, but the tone of the book doesn’t portray her as such a noisy busybody.

Overall, this is probably my favorite plot line in the entire series. Hopefully the author will continue to incorporation a mix of present and past mysteries into the series.