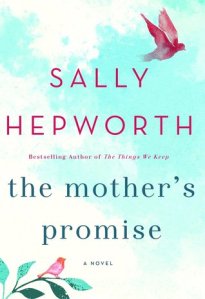 With every book, Sally Hepworth becomes more and more known for her searing emotional portraits of families—and the things that test their bonds. In The Mother’s Promise, she delivers her most powerful novel yet: the story of a single mother who is dying, the troubled teenaged daughter who is battling her own demons, and the two women who come into their lives at the most critical moment.

Alice and her daughter Zoe have been a family of two all their lives. Zoe has always struggled with crippling social anxiety and her mother has been her constant and fierce protector. With no family to speak of, and the identity of Zoe’s father shrouded in mystery, their team of two works—until it doesn’t. Until Alice gets sick and is given a grim prognosis.

Desperate to find stability for Zoe, Alice reaches out to two women who are practically strangers, but who are her only hope: Kate, her oncology nurse, and Sonja, a social worker. As the four of them come together, a chain of events is set into motion and all four of them must confront their sharpest fears and secrets—secrets about abandonment, abuse, estrangement, and the deepest longing for family. Imbued with heart and humor in even the darkest moments, The Mother’s Promise is an unforgettable novel about the power of love and forgiveness.

This novel was extremely difficult for me to get through. Sally Hepworth is a great writer and I love her work.  However, this book touched on a few sore topics for me.  This book includes descriptions of sexual and physical violence, that I found very difficult to read.  In fact, I had to take a break and walk away because of the content.

Another area that really got to me is the story of Alice’s struggle with her diagnosis and her fear of leaving her daughter alone.  I am a single mother and I personally have a very small social circle.  Having something as serious as a cancer scare is my greatest nightmare. I’m worried about what will happen to my son. I’m scared to leave him alone in this world.

Technically speaking, there’s nothing wrong with this novel. I was able to determine one of the twists early on, but not the other.  However, I spent so much time crying as I continued to delve into the book.  This was a very difficult book for me to get through.