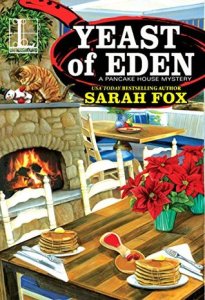 Winter has come to Wildwood Cove, and riding in on the chill is Wally Fowler. Although he’s been away for years, establishing his reputation as the self-proclaimed Waffle King, the wealthy blowhard has returned to the coastal community to make money, not friends—by pitting his hot and trendy Waffle Kingdom against Marley McKinney’s cozy pancake house, The Flip Side. Wally doesn’t see anything wrong in a little healthy competition, until he’s murdered in his own state-of-the art kitchen.

Marley isn’t surprised when the authorities sniff around The Flip Side for a motive, but it’s her best friend Lisa who gets grilled, given her sticky history with the victim. When a second murder rocks the town, it makes it harder than ever for Marley to clear Lisa’s name. Marley’s afraid that she’s next in line to die—and the way things are looking, the odds of surviving her investigation could be stacked against her.

In this fourth installment of the Pancake House Mystery series, Marley finds herself in quite a conundrum when her cook, Ivan discovers a new rival dead in his kitchen.  As Marley begins to ask around she discovers that Wally, the Waffle King, is a former resident with a less than reputable past. Although she no longer has to deal with competition, Marley finds herself more suspects than she can deal with as a second body emerges.

I rather enjoyed this novel and the idea that Marley would have a competitor left me curious to see how things would ultimately play out.  However, I was fairly certain Wally was going to wind up being murdered.  He was so over the top and boisterous that I couldn’t see the author wanting to write too many scenes with him involved.

In this novel, it’s almost Christmas time and Marley is feeling pressure from the upcoming opening of the Waffle Kingdom, finding the perfect present for Brett and ultimately to protect those she cares about.  My favorite aspect of this story is the plot from decades earlier.  Two local girls had gone missing and it was believed that a young man was responsible for their deaths.  I felt that the author did an amazing job of developing this side plot and I almost wished it had been a book on its own.  It was played out perfectly for my true crime obsessed brain and it was just another layer of development for Wildwood Cove.  Let’s be honest, in a cozy mystery, the town and its history can be just as important as the quirky people who live there.  Sarah Fox has helped to make this small beach town another character in this series and I love it!  Hopefully she’ll continue to add little pieces of the town’s history into future novels.

Overall, this was a quick and enjoyable read. I was forced to listen to the audiobook version because I was working all day, but I found that I didn’t want to turn it off, even once I was home. I can’t wait to see what happens next to Marley, Ivan, Brett, and the rest of the Wildwood Cove gang.

← Review: Of Spice and Men by Sarah Fox
Review: A Dog’s Chance by Casey Wilson →