The Successor by Alina Jacobs

Posted by Kristine on July 9, 2018 in Blog Tour, Excerpt, Giveaway 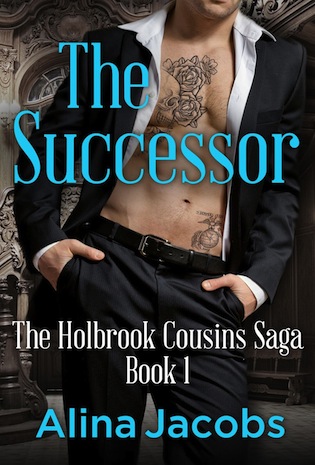 He’s gone from the battlefield to the boardroom; now this billionaire has to win his girl.

Hot tempered Grant Holbrook has just returned to the states and he’s already in trouble.

In jail and estranged from his adoptive parents, Grant thinks his luck is turning around when Kate, his birth father’s gorgeous assistant walks into the police station to bail him out.

As the newly discovered heir to a multi-billion dollar fortune, Grant is the talk of New Cardiff, his father’s exclusive New England hometown, and not everyone is happy that he’s there.

Deemed the most eligible bachelor in America, Grant has to run an international corporation and fend off the woman that want him.

But there is one woman who won’t throw herself at him—Kate.

How can he convince her that he needs her in his life not just for a night but for the rest of his life?

Sleeping with the boss’s heir is not in her job description.

Kate has sworn off men. After a string of bad relationships culminating in the absolute worst night of her life, Kate promised herself she was going to concentrate on her career and bury all of her bad decisions.

But when her billionaire boss asks her to find his long lost heir after a Holbrook family tragedy, Kate finds herself falling for the volatile Grant—but she cannot give in. She would lose her job and ruin her reputation if she were caught sleeping with her boss’s son.

Kate is the executive assistant of billionaire Walter Holbrook, and she prides herself in achieving the impossible. But when Grant starts pursuing her, he may be the one problem Kate won’t be able to solve.

As secrets from her past start to resurface, will it drive her into his arms or will she ultimately resist Grant Holbrook?

The Successor is book 1 in the Holbrook Cousins Saga, but can be read as a standalone novel. This 80,000 word steamy romance novel has no cliffhangers but a very happily ever after.

“I want to do this again in like thirty minutes,” he murmured.

“You needed that,” she told him.

“Yep.” Her spun her around and kissed her lazily, running his hands slowly up and down her body.

He smiled at her and said teasingly, “Is this what you meant when you said you’re here to help me in any way possible?”

She rolled her eyes and flicked him on the nose. He caught her hand and nibbled her fingers.

“No,” she said playfully.

Still smiling at her, he asked, “Do you let my father fuck you like that?”

Kate felt as if someone had dumped ice water on her. She looked at Grant in shock. Yanking her hand away from his, she slapped him hard in the face. Then she hastily grabbed her things and fled the room.

“What the hell is wrong with you?” Grant hissed at himself in the mirror. He could still see the imprint of her hand on his face. Grant didn’t know why he had said that. She didn’t seem like the type to sleep with her boss.

Just his son, that mean voice whispered to him. He had been having such a good time with her. She was the only decent thing in this place of too much wealth and people completely disconnected from reality.

Grant took his third shower of the day. Surely Stefan and the servants or whoever ran this estate would be talking, he thought. Then he went down to see if he could find something to eat. The lunch he shared had not been nearly enough food, and sex made him hungry, anyway.

Stefan took in his appearance, the handprint fading on his cheek, and his still-damp hair. But he was too professional to say anything.

“Is there anything left over from breakfast?” Grant asked him after a moment.

“We can fix you something for lunch,” Stefan told him. “Take a seat in the dining room, please, and I will bring out something shortly.”

Grant sat at the table. Surrounded by the beautifully designed light and airy room, he felt guilt and self-loathing settle on him. What was he playing at? He didn’t belong here. He was some no-count Marine, basically a paid murderer. He didn’t have any friends, his family didn’t want anything to do with him—not that he wanted to have anything to do with them, either—and he had just ruined probably the only chance he would ever have with a woman who wasn’t a trashy gold digger.

Alina is an architect by day, writer by night. Her favorite thing to do is curl up with a hot drink and a good book. She lives in a large Southern city in an old house with an old dog.
Alina Jacobs is a pen name.

← An Impossible World by S.P. Cervantes
The Sexpert by JA Huss & Johnathan McClain →

2 comments on “The Successor by Alina Jacobs”