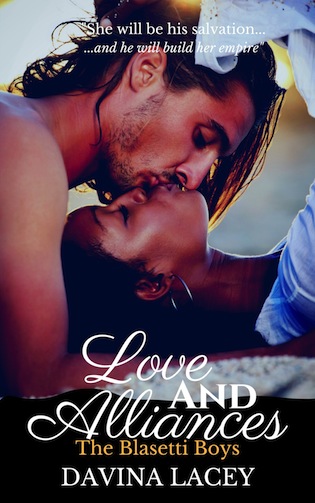 “She will be his salvation… And he will build her empire.”

Jenga Rollins
Hollywood… The ultimate dream. One of the hardest goals to accomplish for anyone brave enough to climb the entertainment ladder, especially for a woman. Yet fiercely independent cinematography student, Jenga Rollins, is determined to finish her master’s degree and to make a difference in the movie industry for females of all races. Trying to bury the most tragic memory of her childhood, Jenga fights to build a new life and doesn’t expect to run into the handsome stranger with the soulful, sad eyes.

Ashton Blasetti
A man of many faces, the son of a self-made Hollywood billionaire and running from a past he can’t forget. A man of both success and mystery, Ashton is known for leaving a string of broken hearts in his trail and for producing some of the most intriguing erotic scenes on film. He’s quite content reigning as the bachelor prince of underground tinseltown. That is, until he finds himself saving Jenga Rollins one day on Malibu beach, a twist of fate that changes everything.
What happens when two people from worlds as different as fire and ice come together?
The scandal continues in Love & Alliances.

**This book is for mature audiences**

That sucks. It’s pretty stupid considering I attend a university that has a campus situated along the Malibu coastline, but that’s just the way things sometimes roll.

Panic slams into my chest and I lose control of my ability to think coherently. My head surfaces for a moment, and I start yelling out for help while still keeping a death hold on Professor Stark’s camera. Water flows over my head and into my nostrils, stinging the sensitive tissue.

Only Jenga Rollins would drown in front of an audience of thousands while trying to save a camera. Oh yeah, forgot to mention the water is probably only about ten feet deep.

At once a hand surrounds my right arm, pulling my body up against a rock-hard chest as we glide back toward the shores. I go airborne next, and I can feel the ripple in the mystery guy’s muscles. Both I and my camera get to ride inside a set of arms that make the Arnold look steroidal. Well, not really, but that’s how it feels since my rescuer with the strong arms just saved me from drowning.

I’m so mortified that I don’t dare try and glance into his face.

What must he be thinking right now?

Gathering plenty of courage, I look up. Why’d I go and do that?

“Thanks for rescuing my camera. It truly appreciates your chivalry.”

to reach out and take my camera out of his hands.

“No problem. I specialize in unique rescue missions.” He holds my

gaze, humor swimming in his eyes and a smile growing on those perfectly

shaped red lips, a mouth made for kissing.

Wow. What a beautiful man.

Find out what happens next in Love & Alliances! 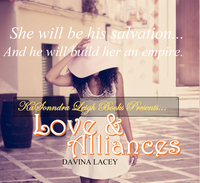 Davina Lacey writes steamy, fun, and glamorous interracial romances that push the boundaries of the imagination and offers a unique and refreshing spin on classic love stories. When she isn’t writing, she enjoys gardening, playing & composing music and spending a large amount of time gobbling up all things historical.