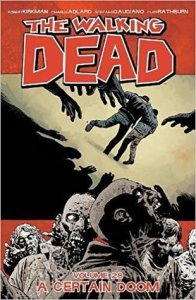 In the aftermath of The Whisperer War–ALL IS LOST as Rick and all of Alexandria fight for survival against the largest horde of walkers they’ve ever faced.

Where we last left Rick and the gang, Rick was informing the survivors that the Whisperers had a herd of thousands of walkers.  Unfortunately, the mega herd is on the horizon and the people in Alexandria are forced to prepare themselves to deal with it.

The one that surprised me is the lack of Whisperers among the herd during this battle.  We know Beta and a few others are still alive because they are the ones who send the massive herd towards Rick and the gang.  But I was surprised to find that they do not appear in this particular volume.

This volume is split between two major plots: fighting off the mega herd and a showdown with the Saviors.  In fact, the Saviors sent and watch as the herd makes their way into Alexandria. It’s only thanks to Jesus, Michonne, Andrea, Eugene, and a few others, that they are able to lead most of the walkers towards the ocean.  There are a few casualties, but the most important loss is that of one of the original group: Andrea. 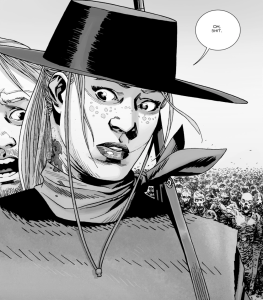 I never really liked Andrea in the show, but in the comic series, she’s the driving force behind Rick’s success over the years.  She obtains the bite during a dizzying series of events in which she risks her life to save Eugene from the walkers.  Since the bite is to her neck, there are no known ways to save her from death, but that doesn’t stop Andrea and the others from working tirelessly  to ensure that every walker they lead to the ocean meets their end at the bottom of a cliff.

Rick is utterly devastated by Andrea’s impending death and she even sends him away at one point because she can’t deal with how sad he is.  Her death is impactful on the entire group because she has been around since the beginning and she’s been one of the strongest characters.  There’s even a series of goodbyes and the one that made me laugh was Negan, because he said he would have been honored if she had been the one to have killed him.  Although I still don’t trust Negan, he does add humor to this particularly dark series. 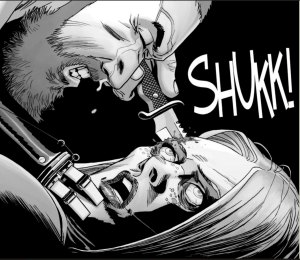 If there’s one thing I have taken away from this particular volume, it’s that I believe we are coming to the end of Rick Grimes.  Considering everything he’s been through, it’s amazing he’s still alive in this series and that he’s still in charge.  But the truth is, he’s been so physically, emotionally, and psychologically beaten by everything he’s gone through.  As the walkers breach Alexandria, he only survived because of Negan’s help.  Robert Kirkman has hinted that it’s possible for Rick to meet his end before the end of the series.  I feel like I’m seeing the writing on the wall.

The death of Andrea will forever impact the group, but I can’t help but wonder where the remaining Whisperers are and what they have in store for the survivors.  I guess I will have to wait until March to find out.

← What Are You Reading Wednesday #60: For Whom the Bread Rolls
To Be Read Thursdays #43: Cozy Mysteries →