When Blood Reigns by Barbara Custer

Posted by Kristine on December 7, 2016 in Book Blitz, Giveaway

Marked for death, Alexis accompanies her lover, Yeron, and four survivors of a zombie invasion on a search for the renegades who created a chemical that induces a zombie-like state. On the way, ravenous flesh-eaters attack Alexis’s team; one survivor turns on her. She realizes too late that the renegades have been tracking her every move. When officials capture her, she becomes deathly ill. Can DNA splicing save her? Will Yeron’s attempts at rescue jeopardize all their lives?

Teodon pointed toward Laurel and held a finger to his lip.

“Do not speak out loud. I will understand the answers you think.”

Okay, Yeron’s badly hurt and so am I. I can’t move him without making his injuries worse.

“All right, then I will levitate him. I know how and I will not see him die. Go ahead of us and lead me to Quyeba’s laboratory. You must forget your injuries and pain. It may seem impossible, but Yeron needs your help. I cannot carry two injured people safely, and if you stay, Laurel will come after you again.”

I understand. Alexis struggled onto her hands and knees.

Harsh chewing and slurping sounds issued from Laurel. Despite the pain wracking her body, Alexis crawled toward the door.

She had to find her way back to the lab. Yeron was moaning, and his cries were growing weaker. Teodon lifted him. He depended on her to lead the way. Any second, Laurel would tire of Woehar and come after her.

Gritting her teeth, Alexis began her Bataan Death Crawl. Her incisions telegraphed bolts of stabbing pain with each movement. It doesn’t matter; Yeron’s life is on the line. She mind-opened the panel and led Yeron and Teodon through the exit.

Once in the hallway, Teodon hesitated.

Woehar had made a sharp right to enter the killing field, Alexis remembered. Left.

She edged along the long stretch of hall. The throbbing from her incision and back brought to mind the pain she’d felt from the rheumatoid arthritis during her job as a respiratory therapist. Her chest tightened at the prospect of navigating that long corridor the way it used to when she faced a heavy shift. No painkillers were forthcoming. She kept going.

It was simple. Woehar had guided right from the laboratory, and then a long stretch of hallway, past two sets of doors, before making her right into the death camp. So Alexis retraced Woehar’s steps and looked for steel doors on her left leading to the lab. Adrenaline would carry her. She’d once read a tale about a mother whose adrenaline rush allowed her to lift a car off her child’s injured body.

Agony bled into her incision with every shift of her knees. The pain was worse in her lower back, where Laurel had kicked her. Sweat rolled down her forehead, dripping on the grid floor. She was leaving bloody handprints and a ribbon of blood. None of that mattered. She strained her ears, listening for familiar voices.

Seconds later, she did hear Quyeba and Zoltar. A few paces further, ungodly spasms tore through her back. The black dots returned. She called for help. She last saw Teodon kneel over Yeron, placing something on his wounded shoulder. Behind them, Laurel emerged from the corridor, growling, her mouth opened wide. The dots swelled and the screams died in Alexis’s throat as the darkness took her. 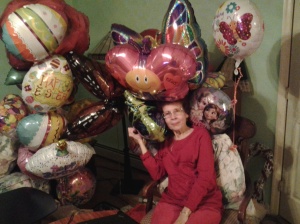 Barbara lives near Philadelphia, Pennsylvania, where she works full time as a respiratory therapist. When she’s not working with her patients, she’s enjoying a fright flick or working on horror and science fiction tales. She’s published Night to Dawn magazine since 2004.

Other books by Barbara include Twilight Healer, City of Brotherly Death, Infinite Sight, and Steel Rose; also novellas Close Liaisons and Life Raft: Earth. She enjoys bringing her medical background to the printed page, and then blending it with supernatural horror. She maintains a presence on Facebook, Linkedin, Twitter, and The Writers Coffeehouse forum. Look for the photos with the Mylar balloons, and you’ll find her.