Posted by Kristine on September 18, 2016 in Children's, Reviews 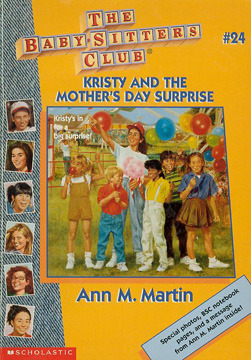 Mother’s Day is coming up and the Baby-sitters have the same problem they do every year: What do they get their mothers? Kristy, especially, wants to do something nice for her mom. Mrs. Brewer has been acting kind of strange and secretive lately, and Kristy’s worried about her…

But then Kristy gets another one of her great ideas. Why don’t the Baby-sitters treat their moms – and the mothers of the kids they sit for – to a day off without any kids around? The BSC plans a gigantic baby-sitting party. It’s a Mother’s Day surprise that couldn’t be beat!

… Until Kristy’s mom reveals a very special surprise of her own.

This is one of the final books before the endless year begins for the members of the BSC. Of course, timing has never been this series strong point and even in this book, there seems to be confusion over what time of the year it is. The book starts off at the beginning of April and then magically Mother’s Day is only three weeks away. But let’s face it, my six year old self didn’t pay attention to the details and didn’t care if the dates don’t add up, so I suppose I shouldn’t either.

I actually liked this book as a child. As I was rereading it, I found myself surprised to find that from a story point, I actually found it to be reflective of upcoming things. I don’t think I ever realized how much foreshadowing there was about Mimi’s health declining and Stacey’s future return. But as I delve into the book, there it was. I found it kind of broke my heart to read about Mimi’s increasing confusion. I was also surprised when Stacey mentions her parents are arguing all of the time.

As for the main plot, it was nice to have a book that was solely focused on one plot. So many of the books get lost with side plots, but this one remained focused and it was refreshing. Offering to give a mom the day off for Mother’s Day is a considerate gift and I felt the plot was done well enough. However, I wish there had been more development with the story of Emily Michelle’s adoption. Yes, Kristy has been talking about her mom’s apparent baby fever for several books now. But I just felt the acceptance of the adoption was a little too easy? Yes, Andrew had some reservations about the new baby, but you would think at least Karen and David Michael would have been hesitant about it as well.

Overall, this was one of the better books from Martin’s originally thirty. But I know that soon enough the ghost writers will take over and the endless year is upon us. Hopefully I’ll continue to enjoy embarking on this rediscovery of one of my favorite childhood series.

← Bette & the Beast by Liza Penn
Secrets by Alice Ward →