Posted by Kristine on September 17, 2016 in Mystery, Reviews, Thriller 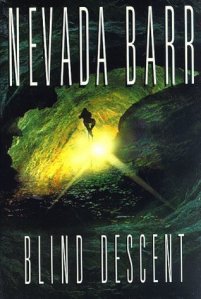 Lechuguilla Cavern is a man-eating cave discovered in New Mexico’s Carlsbad Caverns National Park in the mid-1980s. Estimated to extend for more than three hundred miles, only ninety of them mapped, the cave was formed by acid burning away the limestone; corridors, pits, cramped wormholes, cliffs, and splendid rooms the size of football fields tangle together in a maze shrouded in the utter darkness of the underground. When a fellow ranger is injured in a caving accident, Anna swallows her paralyzing fear of small spaces and descends into Lechuguilla to help a friend in need. Worse than the claustrophobia that haunts her are the signs – some natural and some, more ominously, manmade – that not everyone is destined to emerge from this wondrous living tomb. The terrain is alien and hostile; the greed and destructive powers of mankind all too familiar. In this place of internal terrors, Anna must learn who it is she can trust and, in the end, decide who is to live and who is to die.

I borrowed this book after reading a review that mentioned it was a fantastic adventure book. The truth is, I would say the book as a whole is just okay. Part of my issue is the fact I didn’t realize it was part of an already established series. As an avid reader, I despise reading book series out of order. However, I’ll admit, that this book did well enough as a stand alone book. So that aspect of the book was only a minor annoyance for me.

The story’s plot was interesting enough. Anna is forced to overcome her claustrophobia in order to help a friend of hers. When she gets to her friend, she finds there’s more to the story than what she originally thought. Though her friend falls in and out of consciousness, she’s fairly certain someone hit her over the head on purpose with a rock. A theory that only becomes reaffirmed in Anna’s mind, when someone purposefully causes a landslide that kills her friend. The mystery aspect of the book was solid and I didn’t feel as if the answer was given away or as obvious as it can be with these kinds of books.

I feel the biggest struggle I had was a lack of interest in the story as a whole. While I can appreciate a good mystery, the plot felt dry and dredged along for much of the book. The writing was all about trying to force as many facts and details. The time spent on detailing everyone’s clothes and over detailed physical descriptions (and I mean EVERYONE’S) left the plot stalling time and time again. The other is I didn’t feel any concern or even interest in Anna. Perhaps if I had read the series from the start, I would have felt differently. But as a new reader, I found her to be unrealistic and unlikable. She supposedly suffers from extreme claustrophobia, and yet, she doesn’t seem to have any problem with being in the tighter spaces within the cave system. It’s almost as if this condition is always a second thought or an “Oh yeah… she’s supposed to be claustrophobic.”

I don’t know if I’ll go back and read book one. However, considering this was described as a “fantastic adventure” book, I have to say it’s not. There’s no real adventure aspect to it, even though it involves a trip through a cave system. This is a mystery book and while the mystery was okay, the storytelling was dull and it took over two weeks to read. This is from someone who can read a few books a day, if I have the time to do so. Obviously, this wasn’t my cup of tea and I was very disappointed in it.