Posted by Kristine on September 4, 2016 in Mystery, Paranormal, Reviews 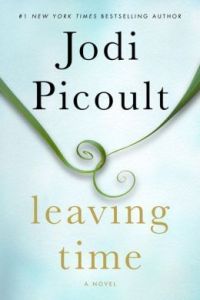 For over a decade, Jenna Metcalf obsesses on her vanished mom Alice. Jenna searches online, rereads journals of the scientist who studied grief among elephants. Two unlikely allies are Serenity Jones, psychic for missing people who doubts her gift, and Virgil Stanhope, jaded PI who originally investigated cases of Alice and her colleague. Hard questions and answers.

I’ll admit, that while I’ve seen many of Jodi Picoult’s novels over the years, this is the first time I have ever read one of her books. As one of our monthly book club reads, I found myself a bit comprehensive about it initially. This is due in large part to the fact I don’t typically read the synopsis on the back (on in the case, on the inside jacket.) Just looking at the cover, I’ll admit I thought it was yet another romance novel. However, all it takes is reading the first chapters to quickly dispel any of my preconceived notions of the book.

The prequel raised my interests greatly. I, too, got to experience my first elephant as a child. I suppose there were always elephants at the circuses that rolled through town every year and I always saw them at our annual zoo trip. But the first time I got to get up close and personal with one, was at the Nashville Zoo. My father had come into town to visit and we went to the zoo. Though I had been several times in the past, this was the first time I ever saw the zoo offer rides on the elephant and camels. Looking back, I feel sorry for the animals, but as a child, I was beyond excited about my ride. I can only hope they were being treated properly.

Anyways, back to the story…

I found myself intrigued by Jenna’s search for her mother. It was clear there were some mysterious circumstances regarding the events that happened the night a caretaker was found trampled at the elephant reserve her parents ran. However, I’ll admit I was a bit suspicious about some of the things that were revealed in the beginning of the book. Primarily those circumstances of Virgil Stanhope, really stood out for me. Truth is, Virgil’s chapters revealed the most about the twist for me. However, it was Jenna, herself, who gave away some of the more obvious clues. Even if they were cleverly disguised, I still got the same feeling I had when I watched The Sixth Sense. Though I didn’t realize the extent of the twist until later on, I did at least guess one or two things that were huge in the final aspect of the book.

Though I was curious for Jenna to finally uncover the truth about her mother and what happened that night, I found I was really looking forward to each new Alice chapter. I loved the way Picoult took the time to document life for Alice as a scientist who was observing wild elephants. Every story she told, no matter how tragic, was intriguing and I couldn’t help wanting to know more about each elephant. In a way, I found I was far more invested in the elephants, more than the human characters. I don’t think that was meant to be the intention of the book, but it’s how I felt while reading it.

There were times, when I assumed Alice was the worst kind of mother. I was convinced she had runaway and left Jenna behind, at times. Which was ironic since it was she who was so enamored with the idea of studying about grief in elephants and yet, it was as if she was incapable of relating to humans. Of course, this was yet another attempt of leading the reader away from the truth of the story. The truth I had somewhat guessed within the first few chapters of the book. And though I was convinced I knew the twist, I still fell for the mislead each time. For this, I have to praise the author because I can’t imagine how difficult it must be to weave a story like this together and I feel she did a wonderful job.

← Absolution by Penelope Marshall
Flesh and Blood by Cynthia Rayne →

One comment on “Review: Leaving Time by Jodi Picoult”