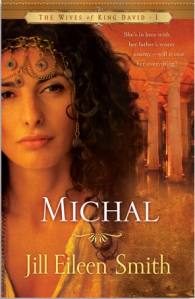 Can their epic search for true love survive a father’s fury?

The daughter of King Saul, Michal lives a life of privilege–but one that is haunted by her father’s unpredictable moods and competition from her beautiful older sister. As a girl, Michal quickly falls for the handsome young harpist David. But soon after their romance begins, David must flee for his life, leaving Michal at her father’s mercy in the prison that is King Saul’s palace.

Will Michal ever be reunited with David? Or is she doomed to remain separated from him forever?

The tale of Michal is one that I didn’t remember from my days of bible study. However, I had heard of her in another biblical fiction book and thought I would check this out for myself.

In true biblical fashion, Michal is “guilty” of beguiling her father and tricking him into marrying off her older sister to someone other than David. This made me laugh as the bible is full of these kind of stories where no matter what the women do, they are guilty of causing everything. Yet, little blame is placed on Saul or David for the many things they were guilty of. I suppose it’s also assumed that Michal’s inability to give David children is a punishment either for being Saul’s daughter or for being so treacherous.

The story itself is decent enough. At times I was really intrigued and didn’t want to put it down. But somewhere in the middle I began to get bored. However the most amusing part was all the times David goes to play the harp for Saul and Saul tries to murder him. It made me envision an old black and white silent comedy film with the fast music. I mean, every time it was exactly the same. Saul throws his spear at David’s heart while he’s playing for him. David narrowly dodges the spear, quickly grabs his harp and then scurries out of the room. It’s comical to say the least.

As for the relationship between Michal and David, I didn’t feel there truly was one. Yes, it’s obvious Michal is infatuated with David, but originally he had no interest in her. In fact, he lusted after her older sister, Merab. Then over the course of two months, all of that magically changes? Yeah… I’m not buying it. And to be honest, King David is one of my least favorite characters once he rises to power. True all biblical characters, with the exception of Jesus, are flawed. But he is even more flawed than most. Though it doesn’t explore it in this book, it’s almost as if he, too, has taken on Saul’s mental ailment. Because only that would explain why he would deem himself worthy of a harem and then still force himself on a married woman. Perhaps my feelings towards the character colored some of my perception of this book. But we will see how the second one goes before I make up my mind.