Posted by Kristine on August 18, 2016 in Crime, Mystery, Reviews 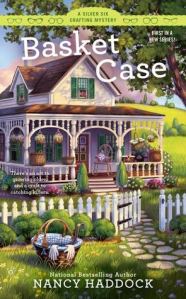 There isn’t much crime in Lilyvale, Arkansas, but local authorities have their hands full with Ms. Sherry Mae Stanton Cutler and her housemates—a crafty group of retirees who’ve dubbed themselves the Silver Six. But when Sherry Mae’s niece, Nixy, arrives to keep them in line, Lilyvale also plays host to a killer.

When Leslee Stanton “Nixy” Nix gets the latest call from Lilyvale detective Eric Shoar, she knows it means trouble. There’s been another kitchen explosion at her Aunt Sherry’s farmhouse, and the dreamy-voiced detective has had enough. If Nixy doesn’t check on her aunt in person, the Silver Six could become wards of the court. But the trouble Nixy finds in Lilyvale is not at all what she expects.

The seniors are hosting a folk art festival at the farmhouse, featuring Sherry’s hand-woven baskets, when land developer Jill Elsman arrives to bully Nixy’s aunt into selling the property. When Jill is later found dead in the cemetery, Sherry is suspected of weaving a murder plot, and it’s up to Nixy and the Silver Six to untangle the truth.

This was an interesting book for me to read. On one hand, it was full of drama, quirky characters and was set in Arkansas, something I don’t believe I’ve seen before in a cozy mystery. On the other hand, the book suffers from some extremely slow pacing and rushing introductions to a mass of characters and then expecting you to be able to keep the all straight. As much as I found the Silver Six interesting and was intrigued by their backgrounds, I could keep any of them straight. There is a complete info dump when they are first introduced, so it’s difficult to keep track of who is who throughout the majority of the story. Add into that, the fact there were also about two dozen other characters that were introduced within the first few chapters and it’s just too many character to keep track of.

The plot was interesting and I was highly amused by all of the shenanigans that was happening in this small town. But the pacing was atrocious. I found myself struggling to get through pages because of the slow pacing. I wanted so much to love this book, but the pacing left it barely tolerable.

This is one of those books where there is definitely a few people who could have easily been the murderer. I felt the author did a decent enough job slowly excluding these suspects and helping to develop the motive behind all of the mayhem. The one thing I hope gets cleared up will be about the Silver Six. These characters are intriguing and add a great sense of amusement to the story, but there needs to be more time dedicated to introducing them. I suppose this will come as they become more developed and you learn more about their pasts and hobbies/interests. But without this time, the four women all blend together, which should be telling as one of them is Nixy’s aunt, Sherry.

Speaking of Nixy, she’s a decent enough character. The issue with her is that she lacks personality. With the exception of always recounting the guys she’s dated and how much she’s learned from all of them, she’s a really flat character. She needs more developing, especially since she’s supposed to be in her twenties and yet, reads like a middle age woman.

Overall, I thought this was a nice start to a new cozy series, but we’ll have to see how book two goes.