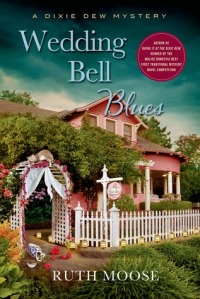 B&B owner Beth McKenzie must deal with a mad bride, a bean festival and a missing white rabbit in this charming Southern cozy from an award-winning author

Beth McKenzie, owner of the Dixie Dew Bed and Breakfast, is enjoying an exciting affair with her new love, Scott. Meanwhile, the town of Littleboro, North Carolina is abuzz with gossip about Crazy Reba’s upcoming nuptials. Most brides go crazy at some point, but Littleboro’s resident homeless lady has had a head start: she’s beloved, indulged, and most of all, eccentric. But at almost 60—or thereabouts—her marriage seems a little peculiar. Sure, she’s sporting a diamond big enough to choke a horse, but no one can tell if it’s real, or just a Cracker Jack prize she pilfered from a yard sale.

Crazy Reba’s wedding plans go confirmedly awry when the bride-to-be is arrested for her fiancé’s murder. Beth, determined to clear Reba’s name, gets in over her head when a lady wrestler who threatened to kill her books a room at the Dixie Dew, and Robert Redford, her neighbor’s white rabbit, disappears.

Then Litteboro’s First Annual Green Bean Festival gets up and running, a famous food writer becomes deathly ill, and Beth must battle through madcap mayhem to apprehend the culprit and save the day.

Wedding Bell Blues is Ruth Moose’s sequel to her winning debut, featuring her colorful array of characters and more laughs and hilarity.

When it comes to cozy mysteries, one of my favorite things is all of the quirky characters that get introduced along the way. This book has no shortage of those types of characters. From Reba, the homeless crazy woman who thinks she’s going to marry “GOD” to Verna whose best friend is beloved bunny, Robert Redford. This kinds of characters add color and humor into the story, in a way that wouldn’t work if the plots were meant to be serious. You never know what kind of crazy plots might pop up because of one of these characters or how it will impact the over all mystery.

However, for this book, these characters are its saving grace. Try as I may, I just could not find any redeeming or even interesting qualities in the main character. As a whole, Beth is dull and yet, the way she manages to find herself in trouble all the time is enough to leave you wanting to bang your head against the wall. I’ll admit, I really wanted to like Beth. As a southern girl myself, I felt I could relate to her situation of returning home after being gone for so many years. Though my circumstances were different, I went through something like this in my early 20’s. On that level, I could relate to Beth, but that’s about as far as I could get to making any real connection with her. I don’t know if it’s constant need to ramble about the town and its history at odd moments or the fact she’s obsessed with smelling the sheets getting ironed, but she just doesn’t do it for me. I suppose I could chalk all of this up to being quirky and due to the fact the series originally was written for town that existed in a time of about three decades ago. But it’s the stupid things she does that just continues to drive the nail in.

Who goes into a cop’s office, picks up the keys to a van that’s been impounded pending an investigation and decides to take a look inside? Beth, that’s who. And she continues to do these asinine things over and over again. Then she tries to make it seem like the cops are out to get her or just plain don’t care. Maybe if she didn’t do suspicious and stupid thing like stealing, interfering in a police investigation, tampering with evidence, breaking and entering, etc… just maybe the cops would be a bit more respectful to her.

I also suppose the timing is an issue with this book. It’s meant to be modern with the mentions of cell phones and computers, but the truth is, these little inputs don’t fit the setting. I think I would enjoy this more if it were set in the original era it was written for. The little bumps in the plot leave a lot of confuse about Beth’s age or even true relation to the town. She supposedly grew up there. It’s a very small town that’s basically dying off and yet, she doesn’t know any of her neighbors? Doesn’t even know anyone to give her a ride when she gets left somewhere?

I really want to enjoy this series, but I feel a decision needs to be made. Either the town is going to be a stereotypical Southern town or it’s not. I don’t really have a preference on which way it’s going to go. But the back and forth is killing the humor and joy of these books and it’s confusing when you don’t know if Beth is late 20’s or early 50’s. There are some really great ideas and amazingly interesting characters in this book and I look forward to seeing how everything develops throughout the series. I just hope Beth becomes more likeable or at the very least, more interesting. I am from the South, born and raised. I don’t need a lesson in all things southern. Little nuances here and there are all that are needed. Sometimes less is more.

This series has a lot of promise and I hope that anyone reading this review will still take a chance on it. My qualms with it are geared primarily around the main character and that happens from time to time.