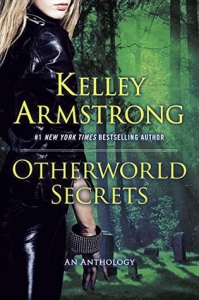 More than a decade after Kelley Armstrong first opened the doors to the Otherworld, fans are still clamoring for more. In response to their demands—and to coincide with the Syfy Network show based on the series—Plume has signed up three Otherworld anthologies, each of which revolves around a different theme. The second in the trilogy, Otherworld Secrets, features fan-favorites such as Cassandra, Savannah, and Adam in rare and neverbefore- published short stories—plus a brand new novella. Fans old and new will flock to this mystery-themed volume to discover the deepest secrets of this captivating world.

It’s been awhile since I last read anything from Women of the Otherworld series. However, I must say it was nice to get brief little visits with all of the main characters. The thing I like most about this series is exactly how many extra stories and adventures Armstrong has created for it. It’s clear she loved writing for the series and as a fan, I love reading it.

What surprised me was my reaction to some of the stories about characters I didn’t necessarily enjoy during the original book series. For example, Hope and Jamie were probably my least favorite characters (with Paige running in a close third) and yet, I found their short stories to be entertaining and in the case of Jamie’s ending, hilarious. But what I think is the most charming part of this series is the fact it’s not primarily about vampires being the biggest bad in the supernatural world. In fact, that is the only short story I didn’t read because Armstrong went against the grain and her vampires are dull and kind of pathetic.

If I had to chose a favorite, of course it would be Forbidden because for me, the werewolves really are the core of this series. Even more so, I like that while the story featured Clay and Elena, it was actually about how Morgan comes to join the Pack and the trouble he stumbles across as he’s trying to make his way to Stonehaven to see what it’s all about.

But for the first time, the werewolves had some serious competition and I found I really enjoyed all of the tales except for the one I had no interest in reading. All in all, this is a great collection of short stories and novellas for this series and it’s one I would highly recommend to all of my fellow Women of the Otherworld fans.