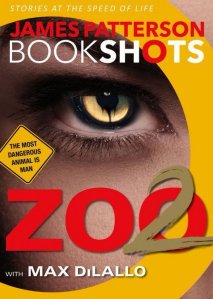 Will the last humans on Earth please turn out the lights?

James Patterson’s ZOO was just the beginning. The planet is still under violent siege by ferocious animals. Humans are their desperate prey. Except some humans are evolving, mutating into a savage species that could save civilization-or end it.

I’ll admit, I was skeptical about this book for two different reasons. For one, many of the Patterson books have lacked the ability to keep me intrigued or keep from annoying me to the point where I wonder he even bothers anymore. So to hear he was coming out with Book Shots, I couldn’t help but roll my eyes, because it’s obviously another ploy to contact to beat that cash cow, which is exactly why the quality of his books has overall dropped over the past several years. My second reason had to do with the fact I absolutely despised Zoo (you can read my review for the original here.) While I thought it was an interesting premise, the flat, boring characters and b-s reasoning for why every animal on Earth was turning on humans was enough to leave you wanting to pull your hair out.

However, I have to admit, perhaps Patterson is on to something. At least with this book, I only had 160 pages of plot to get through and I felt like it forced his co-writer to really focus on the story. Too often, his books stray or lag for far too long. This didn’t really have the opportunity to do that. Add on to that, the fact the humans have begun to change and it made for an interesting tale. Do I believe humans changing would make them the most dangerous animals on Earth? For other humans, yes. To the animals that have been ravaging civilization for the past few months (in this story), no. That’s the one part of this plot that I found to be absurd.

But whatever. It was just short enough that I actually liked diving back into the world, even though I had sworn I would never read the original book again, nor would I ever recommend it to anyone as anything more than kindling. I don’t know if book shots are the way to go for Patterson, but we’ll see after I check out the next few.

← A Sprint to His Heart by Lyla Bardan
Bad Boys After Dark: Mick by Melissa Foster →