Posted by Kristine on June 20, 2016 in Adventure, Comics, Fantasy, Reviews 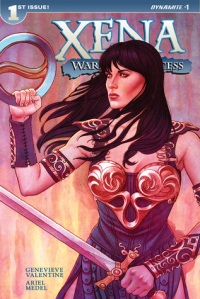 After the Twilight of the Gods, the world is precariously uncertain – and Xena and Gabrielle have been missing from it for twenty-five years. Even without Livia, the power of Rome is growing: Caesar is determined to conquer by lies what he can’t conquer by force, and the people at its edges know what’s coming. (All roads lead to Rome, and Rome is hunting.) Xena and Gabrielle scramble to stop him before they have to wage war against a man they once called a friend. But along the way, Xena will have to confront her past against a rogue band of women warriors, and Gabrielle, whose secret visions are becoming prophecy, will have to protect Xena – at any cost.

As someone who has been embarking on a Xena and Hercules marathon, I couldn’t resist the urge to purchase this comic when I first saw it in my local comic book store. However, I’ll admit I haven’t fully watched Xena from start to finish, so I found myself a little lost with everything that was going on in this comic.

Apparently Xena and Gabrielle have been gone for twenty-five years, the Gods of Olympus are dead (or are they? Must be part of the show I haven’t seen yet.) and Rome has taken over all of Greece. But it’s difficult to tell exactly who is the evil that needs to be reckoned with. In the beginning Xena and Gabrielle save two little girls who are being attacked by villagers for stealing food. There are comments about them being Ares worshipers and I assume this might come back as a possible source of evil or turmoil later on.

We are also introduced to a conflict between the Romans and the harpies. In the past Xena has come into contact with the harpies when she was fighting the Romans. Now, in a time when Romans control all of Greece, the harpies are attacking and killing entire villages. Or are they? Of course, Xena and Gabrielle intend to find out the truth behind what is going on.

I’m not entirely sure what I think about this specific series. Perhaps once I finish the last two seasons, I’ll have that major aha! moment that I’m missing. Or maybe I won’t be impressed? Either way, it’s fun to add this one to my collection and I think the artwork is appealing (so big kudos to Ariel Medel!) and it helped me feel as if I was watching an episode unfold, even if I wasn’t exactly sure what was going on.