Posted by Kristine on May 27, 2016 in Dystopian, Fantasy, Reviews, Teen, Young Adult 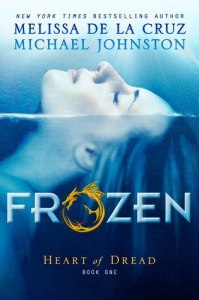 Welcome to New Vegas, a city once covered in bling, now blanketed in ice. Like much of the destroyed planet, the place knows only one temperature—freezing. But some things never change. The diamond in the ice desert is still a 24-hour hedonistic playground and nothing keeps the crowds away from the casino floors, never mind the rumors about sinister sorcery in its shadows.

At the heart of this city is Natasha Kestal, a young blackjack dealer looking for a way out. Like many, she’s heard of a mythical land simply called “the Blue.” They say it’s a paradise, where the sun still shines and the waters are turquoise. More importantly, it’s a place where Nat won’t be persecuted, even if her darkest secret comes to light.

But passage to the Blue is treacherous, if not impossible, and her only shot is to bet on a ragtag crew of mercenaries led by a cocky runner named Ryan Wesson to take her there. Danger and deceit await on every corner, even as Nat and Wes find themselves inexorably drawn to each other. But can true love survive the lies? Fiery hearts collide in this fantastic tale of the evil men do and the awesome power within us all.

There’s something extremely disappointing about picking up a book that looks like it might be interesting, only to discover it’s a huge flop. Especially when it has a big name like Melissa de la Cruz attached to it. That’s what this book represents for me: a flop.

I would take time out to explain the premise, but so little of the actual world building is done for you that it’s kind of hard to do so. In fact, there are so many left out details and plot points, that I can only offer you what I think the book is supposed to be about.

Over a century has passed, since either green house gases/nuclear war has left the entire world in a severe deep freeze and with polluted oceans, a new breed of humans are beginning to evolve with marks and special abilities. Natasha is one of these “marked” individuals who dreams of discovering this world’s version of Eldorado or the Fountain of Youth.

Why am I not clear as to what caused the new ice age? Because the book doesn’t offer any real explanation as to why it happened. I am leaning more towards a nuclear winter as opposed to pollution because after a nuclear war, the climate would change far more quickly than if we were waiting for the Earth to try to regulate itself thanks to pollution. It would also help explain why people rarely live past their mid-20’s and everyone who isn’t killed by the cold or other people, succumb to cancer.

Also, can I say this book is exactly why I believe author reviews are ridiculous on books. I’m all for praising a good book. But the crap that is displayed on the back of this book is just an extreme exaggeration, which leaves me wondering… did they even read the damn book?

De la Cruz and Johnston’s Frozen is as fearless as a futuristic Game of Thrones – and equally addictive. This epic new take on classic sci-fi and fantasy is equal parts wild and wildly romantic. More dragons, please! – Margaret Stohl, author of Beautiful Creatures

Oh where to start with this… okay, I didn’t find Game of Thrones to be the easiest series to get into. But it’s because I don’t like changing points of view all of the time. However, that series is on a completely different level than Frozen. In fact, it’s an insult to George R.R. Martin’s actual creativity and ability to write to compare the two. This isn’t just apples and oranges, this is apples and a mouse trap with a mouse trapped by it’s leg and dying miserably off to the side. The next one compares Frozen to The Lord of the Rings series… um no. Just stop.

Does this book have potential? Yes. But in truth, this is a wannabe fantasy/dystopian based version of a wild west/pirate movie. There are military people chasing after Nat, Wes and her runners. There are pirates that threaten to stop their trip across the polluted Pacific ocean and there’s even a (treasure) map to the elusive “Blue.” And then all of a sudden there are dragons.

In truth this book suffers from too many, half-concocted ideas. More time should have been spent on world building. It’s really hard to understand why Nat feels this draw to “Blue”, other than she lives in a really cold and polluted world. There’s actually more of a mystical element to this pull and a lot of things that happen internally with her and her abilities, but the execution is done poorly and by the time you get to that point (if you do), you just don’t care. I skipped entire chapters to find the characters almost exactly in the same position they were in, 20 – 40 pages before. This should never be the case, unless the book is about a single day or event. Which this one isn’t.

I’ve seen a lot of praise for Wes and Nat’s budding relationship. But in truth, the book wasn’t interesting enough for me to even bother shipping anyone. This is a book that gives young adult books a bad image for being ironic and uninspiring. Which sucks, because had a stronger author written this book, this could have been a phenomenal example of why so many people are drawn to YA dystopians, or YA Fantasy. I refuse to call this book SciFi. There is nothing Science Fiction about this book or at least nothing I read. Futuristic does not equal Science Fiction and I think this is one of those books that gets confused on that point.

I originally picked up this book because the third book, Golden, caught my attention and I wanted to read the books in order. But having been sorely disappointed by this one, I will not be continuing on with the series. I would never recommend this book and honestly, I’m surprised anyone found it to be a “good book”