Review: The Walking Dead Vol. 25: No Turning Back by Robert Kirkman

Posted by Kristine on May 9, 2016 in Comics, Dystopian, Horror, Post-Apocalyptic, Reviews 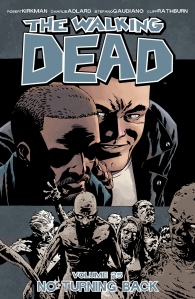 After a devastating act of war by the Whisperers, Rick must chart a path for his community. But when his leadership is questioned, how will he respond?

I found myself less than inspired by this particular volume. As has happened several times throughout the series, there are high points and low points. The low points typically occur when there is a filler volume such as this one. Yes, the story is continuing to move onward, but there’s nothing truly remarkable about this particular part of the story.

The volume isn’t a complete failure. There are some great moments, especially when Rick goes down to Negan’s cell to ask for his advice. In the aftermath of the Whispers attack on the three communities, Rick is under a lot of scrutiny to lead an attack. But something in his gut as well as his past experience with these kinds of attacks, leaves him wary of rushing into retaliation.

I think this is a smart move on Rick’s part, as too often he has put his people in danger because he would react, instead of taking a moment to truly step back and figure out the best course of action. Of course, it’s obvious the two groups are going to go to war with one again in the distant future. I can’t wait to find out how/what/why it all goes down and I can only hope that my favorite characters survive it.

As for the negative, I wish there would be a little more attention to detail. As the group, that discovered the twelve staked heads, take in the scene before them, the heads begin to turn. Now this would be likely, if they weren’t speared with a freaking spike. Logically speaking, the weight of the human head would require they have been forcibly put onto the stakes and the likelihood the brain wouldn’t have been penetrated is next to nil. So… how were all twelve heads turning if the brains have already been damaged? Seems like it might be the case of sloppy writing?

← The Neverland Wars by Audrey Greathouse
Terrapin by A.C. Troyer →