Posted by Kristine on May 8, 2016 in Blog, Blogging Corner 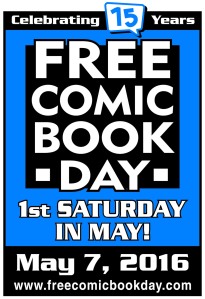 It’s only been three years since I first discovered Free Comic Book Day. Sadly, last year I was busy working and we didn’t get to partake in any of the festivities. But this year, we were able to make it to two of my favorite comic book stores and picked up some really great comics as well as snagged some free ones for my sons.

I don’t know about you, but I don’t like the idea of going to a small business with the expectation to pick up something free and that’s it. So instead, I always make it a point to know what I can spend and what I’m looking for. Fortunately, this is a much easier task as I still don’t have a complete collection of The Walking Dead. Plus, nowadays, there are so many different comics geared towards current children’s shows. This makes it easy to find at least a few different options for my youngest, who is still fighting me on expanding his interests.

The first store we hit had these free Legends of Tomorrow posters. I’m not sure it’ll be a show I can convince my son to like, but his room is decorated in superhero stuff, so there’s always hope he’ll grow into it. 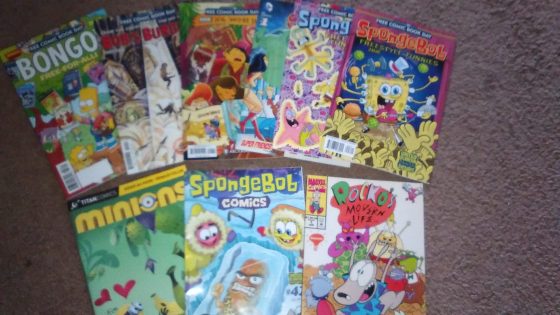 For my youngest son, there were a ton of age appropriate free comics to choose from. Also, one of the stores we visit usually holds on to their leftover free comics from the year before. Usually they are displayed next to the current year’s comics, but this year I had to actually ask if they had any. But I was fortunate because I was able to get last year’s Spongebob and Teen Titan’s Go. Also I found a cute little Minions comic, as well as another Spongebob comic to add to his current collection. But most surprisingly is that I found a Rocko’s Modern Life comic! This is kind of epic because a few months back, I bought the entire series and both my son and I binged on it.

My oldest son is getting back into his love for Pokemon. So when I saw there was a free comic, I couldn’t resist picking it up for him. Also, I was able to snag last year’s free comic. I’m not sure if he’ll be interested, but we also picked up Civil War II and Captain America. All of which will be going out in a box I’m sending him in order to kick off the summer right.

As for me, I was able to grab two more editions for my The Walking Dead series. I’m still missing about eight of the books, but at least I’m slowly collecting them all. I also snagged this year’s free Grumpy Cat (and Pokey) comic. I can’t help it. I just love that little grumpy cat and his snarky sense of humor. My final find was a brand new Xena: Warrior Princess comic! I know this truly shows how nerdy I am. But I have been slowly rewatching the Hercules: Legendary Journeys and Xena: Warrior Princess television series. Finding this beauty was just an added bonus. Especially since I spent the day fighting the urge to blow all of my money on all of the Buffy the Vampire comics that I saw at both stores. Trust me, it was really, really hard to walk away from all of those comics. But I made peace with it by buying one I really wanted. Though I’ll admit, I might be going back next week to pick up The Walking Dead coloring book!

Over all, we had a really fun day and I’m already planning our next excursion to one of our comic book stores. What all did you pick up for Free Comic Book Day?