The Vengeful Half by Jaclyn Dolamore

Posted by Kristine on April 27, 2016 in Book Blitz, Giveaway 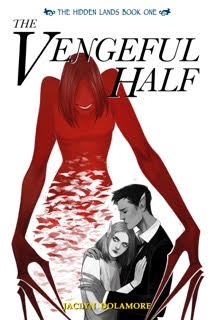 This novel contains interior comics and art by the author.

Olivia might look human, but she’s grown up with a heavy secret: her mother is a potion-maker from a parallel world, the Hidden Lands.

Alfred is the blind, charismatic young heir to the illegal potions trade. When Mom is kidnapped by the magic dealers with whom she once made a bad bargain, Olivia has no choice but to trust Alfred’s offer of help. They travel to a strange new world of bootlegged American pop culture, lifelike doll people, and reincarnation. Alfred finds himself putting his position on the line to defend Olivia against his family’s conniving plans. Maybe he has morals…or maybe he’s just falling in love.

When Olivia escapes from an attack by a curiously familiar sorceress, she learns that potion dealers weren’t the only thing Mom was hiding from. Dark secrets lurk in Olivia’s past, and now Olivia must kill or be killed by the girl with whom she once shared everything…

“Hmm.” She sounded vaguely dismissive, like she thought he was being stubborn. “I’ve never actually met a blind person before.”

“I get that a lot. We’re pretty collectible.”

She laughed. “I didn’t mean it like that! Do you have any blind friends you could ask for advice or something?”

“I’ve never met a blind person before either,” he said, thinking suddenly that this might be strange. Was it strange? Well, you couldn’t exactly check out an advice-giving blind person at the library. “The thing is, for my parents, it isn’t really about the physical condition. It’s a matter of pride.”

“I suspect pride is a bad reason to make a decision,” she said.

“Then Atlantis must be founded on bad decisions. What do you make decisions based on?”

“Honestly? I hardly ever get to make decisions, because my mother says ‘no’ to everything worth doing. Logic, mostly.”

“I’ve never been good at logic,” he said. “At least, not when it goes against my gut feeling.”

“What does your gut feeling say?”

She had stepped a little closer to him. Close enough that he could easily reach out and touch her. “I think you are,” she said.

He imagined what it would feel like if she touched him when she said that. Her touch must be so different from Thessia’s. Everything about her was a little sharper. She wasn’t timid in the same way, even though her situation made her nervous. He knew she didn’t mean to be brusque; she was just being American and Miralem. But—she was brusque. And he didn’t feel like he had to dance around anything when he spoke to her.

He couldn’t be too honest. He’d blow all their plans. 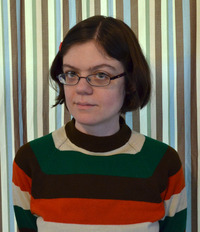 Jaclyn Dolamore has a passion for history, thrift stores, vintage dresses, David Bowie, drawing, and organic food. She is the author of six YA novels, including Magic Under Glass and Dark Metropolis. She lives in western Maryland with her partner and plot strategist, Dade, and three weird cats. To keep abreast of new releases, sales, and extras, please join her mailing list! http://tinyurl.com/JaclynDolamore

← It Started with a Whisper by Shannon McCrimmon
To Be Read Thursdays #26: Netgalley Reads →