Reliving My Childhood: The Baby-sitters Club

Posted by Kristine on April 23, 2016 in Blog, Blogging Corner

Last year I decided the time had come to finally settle into reading some of my favorite books as a child. For years, a close friend of mine, Ashley and I have been discussing rereading all of The Baby-sitters Club. But something last year, finally pushed me over the edge and I decided to not only reread the books (or read the ones I never got to), but I also started collected the series as well.

I know this probably seems weird. After all, I’m an adult and these are books I use to read when I was in elementary school. I can’t even fall back on the fact I have a daughter, because I have two boys. But the one thing I found was that it was hard to find the books through my usual means of finding books: the library. While they had some of the books from the beginning of the series, that would have only gotten me about fifteen books in and let’s face it, there are 201 books in this series.

So I decided to turn my attention towards procuring my own copies of the books. I wish I could say I could easily afford to get all of the electronic copies of the books. But at $5.99 a piece, we’re talking $1203.99. So that wasn’t going to work out so well. But then I discovered I could earn Amazon gift cards by doing surveys. Between those and my own finances, I have been slowly rebuilding my old collection.

In fact, I have managed to get 89 of the books (and I have four more on the way.) I’m actually pretty impressed by the quality of some of them. Many of them are still in great condition. Some even look like new. But I’ll admit, I haven’t been as active with reading them as I should have been. One of my other childhood series had a lot of books still in circulation through my library, so I’ve been reading a ton of those books. As of right now, I will be starting book 15 tonight.  So that means I’ve read the first 14 books of the series, as well as the first Super Special and even The Summer Before, which came out a few years ago. Of course, the books are so quick and easy for me, I could probably knock all of these out in a week or two, but I really want to be able to actually savor the experience. Even if I don’t love the books in the same way, they are a link to my past and they dredge up some great memories, as well as some difficult ones.

So, even though I’ve been slowly collecting the books, I think it’s time I start pushing to read more of the books. Not a crazy amount. But for now, I think it would be reasonable to aim to read at least two of the books a month. That would at least put me in the 30’s by the end of the year. I’ll still have plenty of time to continue to add to my collection and maybe my goal for next year will be to knock them all out. So here’s to reliving my childhood, one book at a time! 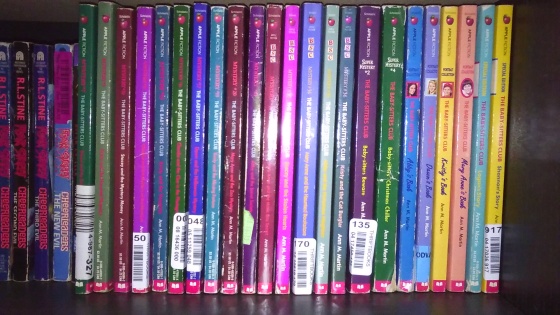 ← Review: Parasite by Mira Grant
Sunday Post #33 – Back in the Habit →

3 comments on “Reliving My Childhood: The Baby-sitters Club”