Posted by Kristine on April 9, 2016 in Reviews, Romance, Women's Fiction 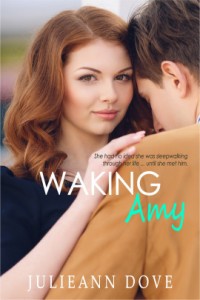 Amy Whitfield is blindsided when she comes home and finds a note on the fridge from her husband, Wesley, stating that after four years of marriage, he’s leaving her. Amy was in the midst of trying to spice things up, to bring life back to their boring marriage. It seems now that she was too late.

As Amy sits with her head between her knees, trying to figure out what to do next, a call comes from Mercer General Hospital. The ER nurse is telling Amy’s answering machine that Wesley has been in a car accident.

When Amy arrives at the hospital, she finds her husband in a coma. The doctors say there is no sign of brain damage, and Wesley will eventually wake up. Relieved, Amy sees this as her second chance: the chance to get it right this time. To channel the girl Wesley won’t leave when he regains consciousness… She just needs some help to pull it off. After all, she was voted girl most likely to die a virgin in high school.

Amy would never figure on getting that help from Mark Reilly…Wesley’s doctor! He’s a non-committer, too-cute-for-his-own-good bachelor, and completely the guy Amy begins falling for. It’s a race against time to see who wakes up first—Amy or her husband.

As I sit down to write this review, I find myself struggling to come to terms with what I just read. On one hand, it’s clear the author has a talent for writing and a knack for adding just the right amount of humor into her story. On the other hand, I completely despised the main character in the beginning of the book. I’m a huge advocate for characters not being Mary Sues and I was ecstatic that Amy can in no way be confused as being perfect. I think my harsh reaction towards her as a character stems for my dislike of completely “weak” characters. By weak, I don’t mean undeveloped or poorly written. She’s actually quite the opposite and the author did a great job building her through the story. By weak, I mean a woman who is too naive and desperate that she allows a man to walk all over her.

It’s clear from the get go that Amy is in a loveless marriage. Had she been a friend of mine, I would have smacked her upside the head and told her to get a clue. Obviously, her husband’s “late nights” and “trips” were a clear sign of infidelity. But I actually can see how one might not necessarily be willing to accept the truth before them. So that wasn’t as big of an issue as her naive behavior was.

In the story, Amy might as well be a virginal nine year old. Though I actually think nine year olds nowadays probably know more about sex from television than Amy does… and she’s married. I’m not sure why or even how someone in their mid-20’s could be so clueless, but Amy takes it to a new high. When her female co-workers are talking about sex during lunch, she can’t fathom why it might be odd to have sex only twice a month with her husband. When the man she asks help from asks if she’s ever with held contact from her husband to gauge his reaction, she can’t understand why he would assume her husband would be on her like a dog in heat. Even her reaction to reading women’s magazines seems very dated, as she proclaims them to be so racy, that she’s surprised they aren’t in a brown paper bag, like they do with the adult magazines.

Okay, so she annoyed me. But to be fair, it’s only because I wanted her to be more than that naive woman who is surprised when her husband leaves her a note about leaving her. The good thing is, I feel the author did an amazing job allow Amy to gain some knowledge and even maturity through her attempts to make herself into a more appealing woman to her husband. We all have insecurities about ourselves and her desire to want to be more attractive and sexier to win back her husband, is a truly relatable experience. I’m sure most of us have had that one relationship where you would have done anything to hold on to it. Fortunately, it was my ability to finally find something I could relate to in Amy’s story, that helped me to truly appreciate it for what it is.

All in all, I think this is a really good story and it’s a positive one because of how much Amy is able to grow throughout it. She still has a long way to go, but by the end, she’s found some self confidence and has been able to face the reality of her life, even those that she doesn’t realize are there (and trust me, there are still some I haven’t touched upon, for the sake of not spoiling the book.) I won’t say I liked the character by the end of the book, but I had hope for her to become a stronger, more independent woman. Fortunately, I get to find out if she’ll be able to continue that growth and find her own way, because the new book, Leaving Amy will be coming out next month.

Reviewer’s note: I received this book in exchange for an honest review

Follow The Writer's Inkwell on WordPress.com
Join 1,725 other followers