Posted by Kristine on March 6, 2016 in Horror, Paranormal, Reviews, Teen 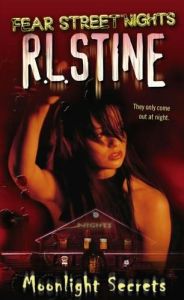 Dana Fear isn’t thrilled about spending her senior year at Shadyside High. The Fear family history goes way back in this town, and she’s not so into lugging around the baggage.
But then she gets in with the Night People. Shadyside’s pretty cool when it’s 3 A.M. and you’re chilling at a bar called Nights with your new best friends.
Until the evil returns, and the Night People start mysteriously disappearing one by one. Dana swears she has nothing to do with it. But all fingers point in one direction. Because there is, after all, a new Fear in town….

Things go bump in the Night…

As the story continues in the Fear Street Nights trilogy, we find that a month has passed since the death of Candy at the hands of the Night People. Of course, they didn’t set out to murder her, but as they attempted to steal back Angelica Fear’s amulet, there was a terrible accident. Nevertheless, the incident is still haunting Nate and his friends.

As the book begins, we find it being narrated by Nate once again, but only as a lead up to the introduction of a new character: Dana Fear. As Jamie’s poor little cousin, Dana is struggling with the knowledge that she may not be able to afford college and that her cousin’s friendly demeanor may be a ruse. But that doesn’t stop her from trying to fit in. After the death of her mother a few months earlier and the recent rejection of her father, she’s in desperate need for something good to happen.

In true high school fashion, Dana finds herself quickly being cast as an outsider. First, because she’s attracted the attention of a boy who may or may not have a girlfriend. And then as accidents begin to occur, more and more of the student body becomes convinced Dana’s evil. Soon Dana is left with no one on her side and that’s exactly what the true killer wants. The legacy of the Fear family no longer haunts the dilapidated Fear mansion, it is set on destroying the Night People.

I suppose this was an okay book for the series. Once again, I appreciate the fact there is a paranormal aspect to the book, but I’m still floored by how no one ever gets caught sneaking out. I also found myself a bit torn about everyone’s attitude towards Dana. For example, one of the Night people all of sudden expresses a lot of interest in her, but is always asking about her family history. Then as more and more people become convinced that she’s behind all the strange and tragic things happening, it basically becomes an all out witch hunt. I’m surprised they don’t show up outside her house with torches. Perhaps I’m reading too much into this trilogy and there are some aspects of it that I have liked so far, but I still can’t say I actually like or enjoy these books.