Red is not afraid of the big bad wolf. She’s not afraid of anything . . . except magic.
But when Red’s granny falls ill, it seems that only magic can save her, and fearless Red is forced to confront her one weakness.

With the help of a blond, porridge-sampling nuisance called Goldie, Red goes on a quest to cure Granny. Her journey takes her through dwarves’ caverns to a haunted well and a beast’s castle. All the while, Red and Goldie are followed by a wolf and a huntsman—two mortal enemies who seek the girls’ help to defeat each other. And one of them just might have the magical solution Red is looking for. . . .

It’s funny, how as adults we are still attracted to things that remind us of our childhoods. Truth be told, I’ve read more fairy tales and fairy tale retellings as an adult than I ever did as a child. So when I saw this cover on Netgalley, I couldn’t resist requesting it. The cover alone is eye-catching and the fact Red is scowling instead of just skipping along is an interesting way to depict it.

Fairy tale retellings can go really wrong, but let me tell you, this is one of the best I’ve read in a while. Taking place within The Woods, the entire world Red lives in is filled of mystical creatures. As a young witch, she struggles with the confidence to perform her magic, especially after one attempt injures her beloved grandmother, Rose. In a way, this is a fairy tale within a world of fairy tales, as Red and her companion Goldie discuss other fairy tales like Snow White and claim they happened several hundred years before their time. This is pertinent to the story as it seems, in this world, several people are named Snow, Rose, Red, etc. For example, Red’s grandmother and her sister were nicknamed Rose Red and Snow White, but neither are the original characters.

This is an interesting and appealing way to handle the overlap of fairy tales, especially when you begin to recognize names and nicknames of the characters as fairy tale characters. For example, Red’s best friend, Rump (aka Rumpelstiltskin) is mentioned quite often (and their adventure take place before this book and are featured in the author’s first book, Rump). Also, throughout their adventure, Goldie and Red run into Horst, the Huntsman several times as well as meet up with The Beast in the enchanting castle.

The thing I enjoyed most of the story is Red’s adventure itself. Setting out on a simple journey to collect three ingredients to help heal her sick grandmother, Red is easily distracted by the idea of finding a way to help her grandmother live forever. Initially, she adamantly claims her grandmother is merely ill, but by the end of the book, she’s lost sight on her real mission and is battling against her own fears of ultimately losing her grandmother to death. Along the way, Red makes friends with some interesting characters, Goldie, who is a happy-go-lucky chatterbox, the mysterious wolf and even a dwarf name Borlen. In the end, she finds a way to accept the fact magic cannot overcome death and gain the confidence she needs to control her magic.

Purchase the rest of the series: 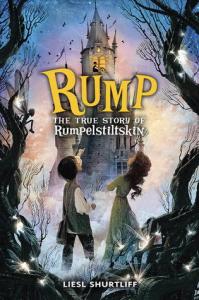 ← Demigods and Monsters by Raye Wagner
To Be Read Thursdays #17: New Netgalley Finds →