Things are never as they seem.
5 Comments

Review: Stars Above by Marissa Meyer 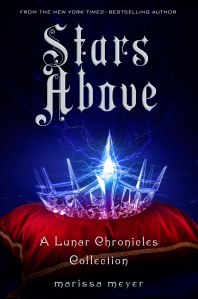 The universe of the Lunar Chronicles holds stories—and secrets—that are wondrous, vicious, and romantic. How did Cinder first arrive in New Beijing? How did the brooding soldier Wolf transform from young man to killer? When did Princess Winter and the palace guard Jacin realize their destinies?

With nine stories—five of which have never before been published—and an exclusive never-before-seen excerpt from Marissa Meyer’s upcoming novel, Heartless, about the Queen of Hearts from Alice in Wonderland, Stars Above is essential for fans of the bestselling and beloved Lunar Chronicles.

—
The Little Android: A retelling of Hans Christian Andersen’s “The Little Mermaid,” set in the world of The Lunar Chronicles.
Glitches: In this prequel to Cinder, we see the results of the plague play out, and the emotional toll it takes on Cinder. Something that may, or may not, be a glitch….
The Queen’s Army: In this prequel to Scarlet, we’re introduced to the army Queen Levana is building, and one soldier in particular who will do anything to keep from becoming the monster they want him to be.
Carswell’s Guide to Being Lucky: Thirteen-year-old Carswell Thorne has big plans involving a Rampion spaceship and a no-return trip out of Los Angeles.
The Keeper: A prequel to the Lunar Chronicles, showing a young Scarlet and how Princess Selene came into the care of Michelle Benoit.
After Sunshine Passes By: In this prequel to Cress, we see how a nine-year-old Cress ended up alone on a satellite, spying on Earth for Luna.
The Princess and the Guard: In this prequel to Winter, we see a game called The Princess
The Mechanic: In this prequel to Cinder, we see Kai and Cinder’s first meeting from Kai’s perspective.
Something Old, Something New: In this epilogue to Winter, friends gather for the wedding of the century…

There were a lot of really great things going on in this book of short stories. For one, it allowed fans of the series an opportunity to really see the lives of several of the characters before the series begins. If I had to pick a story as my favorite, it would have to be The Keeper. Despite my disinterest in Scarlet (which I still don’t get), Michelle’s journey of becoming Scarlet’s primary caregiver, while keeping the largest secret in the known universe, is a very enjoyable read.

As for the others, the prequels for Cinder, Cress, Winter and even (surprisingly) Carswell were phenomenal reads. The Princess and the Guard would have to be my second favorite of this set. As everyone knows, I raved about Fairest and Winter is one of the only characters that is truly accessible to Levana. In this story, you get to see not only the growing devotion between Winter and Jacin, but also the events that led to Winter refusing to use her powers and ultimately her disfiguration.

Sadly, I was unimpressed by The Little Android and even most of Something Old, Something New. For the first, it was mainly because it didn’t involve any of the characters from the series. I thought it would be about Iko, why it wasn’t is beyond me. Instead it’s about some random android named Star. I just couldn’t get into the story. As for the second story, I was pleased to learn some about the events following Winter. It was intriguing to see how Cinder had managed to abdicate her throne and allow Lunar to elect their leader. I wish there had been more about that struggle. It was also interesting to see the other characters come together. But since the wedding was for Scarlet and Wolf, I just didn’t care. I know, I know. My disinterest in the pair makes no sense. So many people absolutely love the two. But I don’t get it. Scarlet is a nobody and there was nothing interesting about her or her story. She didn’t fit into this universe, which is so odd, because Wolf did.

Anywho, this is a wonderful way for fans of the series to continue enjoying it for just a little longer. I was tempted to read the excerpt for Heartless, but I decided I’d rather wait until the book comes out. So I can’t give you any insight on my thoughts about that, yet.

Pick up your copy on Amazon: Stars Above by Marissa Meyer

Tags: After Sunshine Passes By, Carswell's Guide to Being Lucky, Glitches, Marissa Meyer, Somthing Old Somthing New, Stars Above, The Keeper, The Little Android, The Lunar Chronicles, The Mechanic, The Princess and the Guard, The Queen's Army Permalink

5 comments on “Review: Stars Above by Marissa Meyer”