Review: Baby-Sitters on Board! by Ann M. Martin

Posted by Kristine on December 26, 2015 in Books, Children's, Reviews 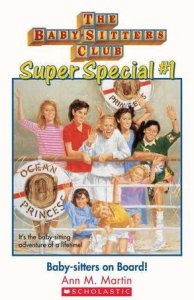 Kristy, Mary Anne, Stacey, Claudia and Dawn are the luckiest baby-sitters in the world. This summer they’re going on the greatest trip ever: a plane ride to Florida, a boat trip around the Bahamas, and then three days of fun – in Disney World!

Of course they have a million adventures. Claudia gets notes from a mysterious “Secret Admirer.” Kristy, Mary Anne, and Stacey make some unusual new friends. Dawn has her first real romance. And they still have time for what they like best of all – baby-sitting.

I wasn’t entirely sure how to fit in the Super Specials when it came to my rereading schedule for this series. After some research, I discovered this book was released after book twelve in the series. Of course, this doesn’t exactly fit the timeline because it’s supposed to happen during the summer before the original five head into eighth grade. It doesn’t even fit the summer schedule because it takes place after Stacey and Mary Anne went to Sea City with the Pikes. But whatever. I was a kid and I loved this series. So what if it’s not chronologically accurate? After all, how many summer vacations, holidays, birthdays, etc. did they have? They had several Christmases throughout the series and yet, they were stuck in a time loop.

Throwing away all of my adult thoughts on the book (especially about how Mr. Pike’s job allowed him to take along his entire family on this free trip? Or why did Watson even want to tag along on such a trip?), let’s get down to the basics. This is a book of firsts for the series. One, it’s the first book in which every member of the club is allotted their own time for their story lines. Each chapter is a different point of view and several actually overlap, thus allowing a full view of the trip. This is also the first book, in which other characters are allotted their own chapters. And this is the first and only book in which Mallory is featured as a sittee and not a sitter.

There’s drama, mystery, romance (or as romantic as a book about teens/preteens can be) and of course, baby-sitting. Stacey and Mary Anne are the only two who are required to work during the trip and for the most part that’s okay. They both meet some interesting people and help the Pikes wrangle up their horde of children. Meanwhile, Kristy and Dawn are constantly bickering. It’s funny, their fight is over cleanliness and yet, they were bunking with the biggest slob around: Claudia. I won’t even pretend to understand why the fight was between these two. Claudia’s the slob in the group and apparently someone forgot this key detail. Claudia and Dawn find boys they like on the trip and Kristy befriends an elderly man. Once again, not going to say I understand all the choices made, but hey, at least there was some variety.

Is it the best book ever? No. But as a child, I loved the Super Specials and all of the adventures the girls had while baby-sitting. So in my mind, my six year old self definitely deserves to rate this book as four stars.

Pick up your copy on Amazon: Baby-Sitters on Board! by Ann M. Martin

2 comments on “Review: Baby-Sitters on Board! by Ann M. Martin”