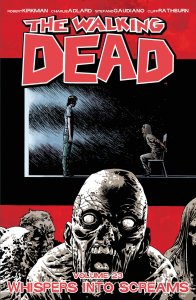 The new era of peace and prosperity is interrupted by a new type of enemy. One that travels amongst the walkers. One that will turn whispers of their appearance to screams.

This is a particularly interesting volume because the majority of it actually takes places away from Rick and the majority group. In fact, it seems as if Carl is starting to become a more prominent character in this series. Which is great, because he’s a teenager (I think?) at this point in time and he’s the future for the survivors. Settling into his new home on the Hilltop, he finds that with his name comes a threat from within the community. The other boys his age are angry for him stepping in while they were bullying a boy in the previous volume and they dead set on revenge. Even more so, his and Sophia’s conflict with the boys causes a lot of discourse within the community as a small group of people truly believe he and Sophia are the ones to blame.

This puts Maggie in a difficult position and makes her a target. While she’s busy putting out as many (theoretical) fires as she can, she finds she has to deal with a new threat outside of the walls as well this new one within it. After one of the whisperers (I think that’s what they are being called) is captured, the group is surprised to discover it’s a teenage girl named Lydia, behind the face of a dead person and I mean that literally. Her group survivor by wearing the skin of the dead and walking among them. Their way of life is pretty savage and nomadic, as she describes being raped repeatedly (though she doesn’t believe it merits the same meaning) and always being on the move. But what’s most interesting is how Lydia manages to attract Carl so wholeheartedly in only one day. In what seems to be a pattern of Carl’s growing interesting in the opposite sex, he throws off his last piece of innocence and gives up his virginity.

This new group is actually a great concept and I actually find myself hoping they can get along with the communities amicably. It seems as if they have something they could teach the others about surviving with the walkers. But on the other hand, their way of life does seem to be almost cult like. It’ll be interesting to see where this goes, especially with this volume ending with Carl taking off after them to rescue Lydia who had seemed to show signs of wanting to stay at the Hilltop. I just know that Rick will fly off the handle once he discovers Carl is out in the world on his own. Hell, I hate to see what happens when he finds out about the two boys that jumped Carl and Sophia, to be honest. Overall this was a great volume and I’m fighting the urge to read the next one, since it’s the last one for awhile.

Pick up your copy on Amazon: The Walking Dead Vol. 23: Whispers to Screams by Robert Kirkman