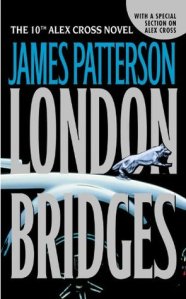 Minutes after soldiers evacuate a Nevada town, a bomb completely destroys it. On vacation, FBI agent Alex Cross gets the call: the blast was perpetrated by the Wolf. A supercriminal and Cross’s deadliest nemesis, the Wolf threatens to obliterate major cities, including London, Paris, and New York. Then evidence reveals the involvement of a ruthless assassin known as the Weasel. Could these two dark geniuses be working together? Now with just four days to prevent an unimaginable cataclysm, Cross is catapulted into an international chase of astonishing danger — and toward the explosive truth about the Wolf’s identity, a revelation that Cross may not survive.

Color me bored, but the Wolf just isn’t that interesting and the constant way they “uncover” his identity is ridiculous. This was by far, the worst book of the series so far. You want me to believe that a single man managed to organize blowing up an entire town and this isn’t international news? And why in the heck would the infamous Wolf pair up with the Weasel? These are just a sample of the questions you will be asking yourself if you try to read this book. The truth is, there is so much fantastical wand waving, I almost expect a pumpkin to turn into a carriage at some point.

Also, what two year old talks the way Little Alex does? I’m sorry, but normal two year olds don’t speak like they are twelve. But according to Patterson, all three of Alex’s children are “gifted”? No. I’m sorry, but I’m waving the B-S flag. This completely impossible that one family could hit the genetic jackpot with three separate children. They can be well educated, but must they be freaking stepford children?

At this point in the series, Alex is bugging me like a human Bella, who basically had a heart attack every time Edward even thinks about leaving the room. This man is incapable of just doing his job. He is constantly falling for any and every female in the series and half of the times he magically figures out who the bad guy. Since when do detectives NOT do detective work? I just wish Patterson could return to the days of his original Alex Cross books and really focus on creating solid bad guys and plots, instead of just trying to push out 24+ books a year.

← Doing the Best You Can
Review: Mary, Mary by James Patterson →